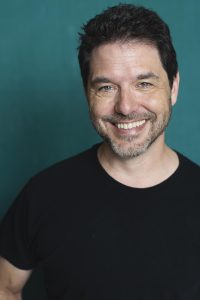 John Gremillion is a stage, film and voice actor who has been working in anime for over 20 years, providing
voices for dozens of popular anime titles for ADV, FUNimation, Okratron 5000, and Sentai Filmworks. John’s
most popular roles include Gentle Criminal in My Hero Academia, Dracule Mihawk in One Piece, Roland
Chapelle in Food Wars, Arthur Randall in Black Butler, and D in Sentai’s recent re-release of Vampire Hunter
D (Nomination – Best Male Lead Vocal Performance in an Anime Feature Film, 2015). Other roles include
Nakeshi Hirokawa in Parasyte: The Maxim, General Liver in Akame Ga Kill!, as well as roles in Attack on
Titan, Black Clover, Fire Force, Log Horizon and many others.
A professional video editor for over 20 years, John worked on the supplemental materials ADV’s 2010 release
of Halo Legends and for FUNimation’s release of Assassination Classroom Vol 2. He studied film at The
University of Texas at Austin and Theatre Arts at The Juilliard School of Drama.